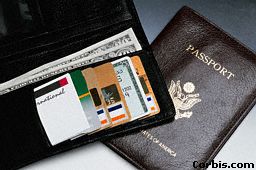 Lucy walked along the sidewalk behind her mom. She hated running errands with her mom, but since she was only 8 years old, she had to. Lucy started kicking a pebble along with her blue canvas running shoes. She had her hands shoved deep in her jeans pockets. As she kicked the pebble, she looked down, her mass of red, curly hair falling into her face.

Lucy kicked the pebble hard and it landed to the side of the sidewalk. She went over to retrieve it and saw something beneath a pile of fallen oak leaves. She pushed the leaves aside, revealing a black wallet. She picked it up.

"Come along, dear," her mother called. Lucy looked up to see that her mom was now halfway down the block. Lucy put the wallet in her left pocket and ran to catch up to her mom.

They turned the corner and walked the next two blocks to their house. Lucy helped her mom put the groceries away and then went upstairs to her room. She reached into her pocket to take out the chocolate bar her mom had bought her, but she felt the wallet there. She had forgotten about it, but now she opened it up.

Then Lucy remembered that the money did not belong to her. Someone had lost the wallet, and probably wanted it back. She knew that the right thing to do would be to return it. She thought again of all the things she could buy with the money. People would wonder why and eight-year-old had so much money, but she could tell them it was a present from her rich aunt. She could tell them that her rich aunt lived in England, and lived in a big house with a maid, and it was her eighth birthday so the aunt sent her the money to spend on whatever she wanted. Nobody would know that she had found the wallet.

Then, Lucy started to feel guilty. She knew that the money did not belong to her. She thought of how she would feel if she lost something and it was not returned. Lucy knew that she had to return the wallet.

She took the wallet downstairs and told her mom that she had found it along the sidewalk. Her mom looked in the wallet and saw a phone number. She called it and said that her daughter had found the wallet, and gave them the address of the house.

About ten minutes later, there was a knock on the door. Lucy's mother opened the door, and recognized the man from his picture in the wallet.

"Thank you very much for returning my wallet," the man said to Lucy. "I was afraid that someone had kept it. I am glad to see that there are honest people in the world."

Lucy smiled. She was glad that she had returned the wallet, since he seemed like a nice man.

"Here is some money for your trouble," the man said. Lucy reached out to take the five dollar bill. It was just enough to buy a book.

"Thanks!" Lucy said as the man left the house.