Holden of the 90's: A Modern Day Holden Caulfield from "Catcher in the Rye" 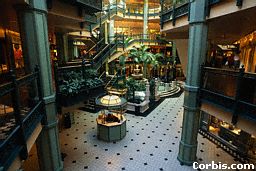 I went Christmas shopping the other day with Sally Hayes. I had to get a present for my mother. That's why Sally came with me. I didn't have the slightest idea what to get her. I also had to get a present for my little sister Phoebe. I didn't need help with her present, though. I always know just what she wants. It's kind of weird. She's a really cool kid, though. I swear she's the only one who really understands me.

Anyways, Sally and I were Christmas shopping. We were at the mall near my place, and it was full of wannabes. Especially in this one clothes store we were in that was supposed to be really cool or something. Yeah, right. You go in there and spend a fortune just so that you can be in style. Everything looks like crap, though. They sell all that soother jewelry, Raiders stuff, and Docks. I wouldn't be caught dead wearing any of that stuff. I really wouldn't.

When we were in there, Sally picked up this really tacky looking blouse. I almost hurled.

"Oh, Holden. I swear you have, like, no taste at all in clothes."

I ended up buying the stupid shirt, though. I could care less what my mother wore, just as long as I got buying her present over and done with.

We went into this movie store next. Personally, I hate movies. They're so stupid. Sally wanted to go in there, though.

When I was in there, I actually got something cool to get Phoebe. It was the "Rocky Horror Picture Show" video. I love that movie. I really do. It's the only movie I do like. I mean, it looks so fake, but it's SUPPOSED to look fake, if you know what I mean. It's really wild. It's about this real fairy of a guy that builds this other guy, kind of like Frankenstein. Then, he tries to take over the world. These two nerds have to try and stop him. Everyone keeps singing and sleeping with each other through the whole movie. They all act so weird. I figured Phoebe would just flip over it.

On our way out of the mall, I saw one of those Salvation Army donation containers. I dropped in all of my spare change. After all, I had a lot of cash with me. I'm also a pretty generous guy at times. I really am. Most people just put in some money to make themselves feel generous, though. Nice try. They drive around in a BMW or something, and then give a few pennies to the poor once a year. Then, they feel so special for doing it. They're such losers.

Anyways, I hate Christmas. I really do. It's so full of losers and wannabes. At least I get a holiday from school, though.