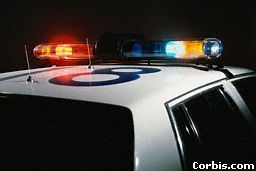 There were few other cars to pass as I sped down the highway. I had my foot to the floor by now. At first the breakneck speed had seemed more frightening than capture, but by now I had grown almost used to it. The road was straight and smooth, and there were no pedestrians to worry over. With no sign of flashing lights behind me, I drove towards the North Star. I was driving for freedom.

But where was that? Up in some small Northern town? In the next province? B.C.? Should I have driven South instead, to blend in and become lost in the city? Should I have headed for the border? Would they have let me across? Should I have taken a plane out of the country?

I suddenly wished I had paid more attention to the cop-and-robber movies. I knew nothing about avoiding the law. But, then, the movies were created by writers - did they know more than I about being a fugitive?

I suddenly became very homesick. I wanted my house. I wanted my bed. I wanted my mother. Would I ever see her again? Would I see any of my friends or relatives again? What would they think with me gone? I began to wonder what I would do where I was going, wherever it was. Without my family and friends, would life be worth living?

It was better than the alternative, though. I had grown up knowing what horrible places prisons were, but also knowing I would never be there. Imagine, being locked in a cell, with no privacy, having to go to the bathroom in the open, and having to eat whatever horrible food they wished to give me. That is where I would surely be, though, if I was caught: assaulting an officer, reckless driving, fleeing the scene of a crime, and escaping the law. All because of a misunderstanding. How was I to know that the man who grabbed my arm in a dark parking lot was merely a policeman trying to get my attention?

The pain in my head began to feel worse: the constant throbbing had become stronger, and I suddenly felt even weaker and dizzier than I had before. I guessed that I had been going on adrenaline, as my strength faded and I struggled to keep the car moving straight.

I started to cry. The events of the day and the pain of the bullet wound were catching up to me. My tears blurred my vision. I wiped the tears from my face, but when I glanced on my hand, it was covered in blood. My wound was bleeding again.

I had to get off of the highway. As I turned onto the off ramp, my mind registered the name "Maple Road." My uncle had lived on Maple Street - or was it Pine or Birch? My mind had always mixed them up. I spent a lot of time there growing up: every week, my mom had taken me around to visit our relatives. Most of them were dead now, which was just as well. They would be spared the reports of my crimes and . . . my death. I realized with a shock that I was dying: the pain in my head was unbearable now, and I could barely drive. Nobody could sustain a gunshot wound to the head, drive for hours under stress, and live to tell the tale: only in the movies.

I had to stop driving. I was only putting others in danger by continuing on. Whether I kept on or stopped, I could not escape death. Where the police failed to catch me, Death would. All I wanted to do was rest. At least I would die in relative peace.

I slowed and pulled over to the side of the road. I saw no houses, only trees, trees stretching into the blackness beyond. I was alone.

I undid my seat belt - when had I found time to put it on? - and laid down on the seat. Never had it felt so comfortable - it was like having a cozy feather mattress. My head still throbbed, but at least I had somewhere to rest it. I felt blackness enveloping my consciousness, and I knew it was only a matter of time.

No. I did not want to die alone. I forced my arm to reach for my cellular phone. 9-1-1. Was it even in service in that area? Where was I?

The voice asked my location. "I don't want to die alone."

The voice was saying something else, but my hand released the phone. It went clattering to the floor of the car.

I could feel the blood flowing like the tears down my face. Who would get my things? Would the cat understand that I was gone? Who would replace me at work? Where was my mom?

The sirens and flashing lights were only background noise to my thoughts as I remembered details of my life that had been forgotten for so long.

There were voices in the distance, so far away . . . they would not let me die alone. I felt hands lift me from the seat of the car and onto something else. I felt the light sprinkling of rain on my face, but I was being pulled down, down into the blackness . . .

"She's lost a lot of blood," I heard a voice say in the distance, "But it looks like you'll have a trial after all, officer."

Then the blackness was all I knew.