Desperation and a Donut Shop 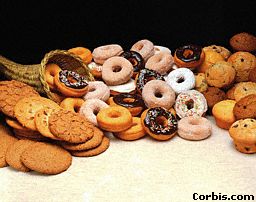 He must have been sitting in his 1985 pale blue Buick four-door, staring at the glass doors that entered Tim Horton's, for an hour. He made some final adjustments in his rear-view mirror to his blond, curly wig, his black thick-rimmed glasses, and his removable moustache and goatee. He put on his Blue Jays cap and black leather jacket, then climbed out of his car. He walked towards the doors slowly, eyes darting left and right. He silently thanked the fates that the cliche of cops going to donut shops was not true.

He finally reached the glass doors, just behind an old lady that reminded him of his grandmother. She had short white hair, thick glasses, and skin wrinkled like the ripples on a sandy beach. She wore a blue print dress with thick black shoes. She smiled at him, and he held the door for her. He almost turned back, but something deep inside him knew that if he did not do it now, he would never find the nerve to.

He approached the counter slowly, keeping the old woman a few feet ahead of him. She ordered a coffee, medium, two cream and a sugar, with a honey-dipped donut. He waited, watched as the woman fumbled in her change purse, shaking hands finally counting out the exact change. She picked up her coffee and donut, and he watched with dismay as instead of leaving, she sat at a two-person window seat beside the door.

"Can I help you sir?" He jumped as the cashier startled him out of his transfixion with the woman. "Sir?"

"I . . . uh . . ." As he looked at the young, blonde-haired cashier, he wondered whether to go on. Part of him told him it was wrong, very wrong, and dangerous. Part of him told him that he had to - it was his only choice. "I'll . . . I'll have a honey-dipped." He silently cursed himself. He had not meant to order the same thing as the woman. He just could not help thinking that he did not want her to get hurt. She was innocent. The cashier was innocent. He was about to lose his own innocence.

The cashier had turned her back to him. This was his chance. He had waited until there was only one person working - at least on the front - and the place was deserted . . . except for the old woman by the door.

He reached into his inside jacket pocket. He could feel the gun there, cold steel on his hot, sweaty fingers. He grasped it and pulled it from his pocket. He was shaking more than the old woman with the change purse. He almost dropped the gun. He gripped it harder. He pulled it up and aimed it at the cashier.

"Will that be all-" the cashier had turned around, then stood frozen, eyes wide, mouth open. The donut slipped from her hand and hit the floor.

"Give me all your money" he said, his voice sounding too shaky and weak. He cleared his throat. "Now" he said louder.

The cashier reached for a paper bag and opened the till with a "ding," all the time watching the man with the gun.

He kept glancing back and forth. Nobody came in. The old woman sat still, holding her partially eaten donut. The cashier seemed to be taking forever, shaking hands fumbling with bundles of money.

The cashier was still staring wide-eyed at him as she slowly handed him the paper bag. He had just taken it from her when he heard a man's voice yell, "Freeze!"

He spun around, firing a shot towards the door. Too late he saw the old woman's body flung back and blood spreading on her dress from the wound on her chest. He glanced towards the door, moving in slow motion, and feeling the searing pain in his chest before he heard the "bang" from the policeman's gun. He dropped the paper bag on the floor and reached a hand to his chest. He felt the sticky wetness on his hand and the pain in his chest with every short breath he took. He felt the blood filling the bottom of his lungs and heard his breaths become gurgly. He felt more and more lightheaded and his body felt weaker and weaker. He slumped to the floor as everything went black.

Pages from a newspaper fluttered across the empty parking lot, crossing the yellow tape that still surrounded the Tim Horton's, finally coming to rest against the brick of the building. "Straight-A Student Shot by Police in Robbery Attempt" the headline read. The subtitle read, "Greed cost promising youth his life."