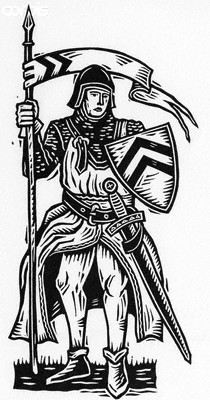 The scene opens in a medieval town square, with buildings in the background and cobblestone pavement. The square is crowded with market stalls, selling anything from breads to pottery to wooden toys, and the space between is crowded with people in the clothes of working men and women, walking and looking at the wares. A handsome young man, dressed as a medieval nobleman in fine clothes, rides to the edge of the market on a horse with elegant trappings. He dismounts, tying his horse to a nearby post.

As he walks into the crowd, people who see him bow their heads slightly as he passes, and he smiles in return.

The nobleman searches the market with his eyes, as if looking for something in particular.

A middle-aged woman holds out a loaf of bread from her booth as the nobleman passes.

The nobleman turns to the bread seller, smiling.

The bread seller smiles a toothy grin and laughs.

[Nobleman] But no bread today. I am looking for Old Duncan in particular  I hear he has returned after his long absence.

[Bread Seller] Aye, that he has. Ive heard hes traveled far this time, and brought back many interesting things  though Ive been so busy with my breads this morning I havent had time to see for myself. Heard he brought back something specially for you, though.

[Bread Seller] Hes over there in the middle, right beside the fountain  must have been here early.

[Nobleman] Thank you kindly, lady. Maybe I WILL stop for some bread after I see what Old Duncan has to offer today.

The Bread Seller bows her head at the Nobleman, and he walks away, making his way through the crowd toward the center of the market as the people continue to bow and greet him as Mlord as he passes.

Soon the Nobleman is standing in front of a stall filled with exotic and unusual items, such as ornate armor, oriental-style pottery, and jewelry. An old man dressed in ornate but travel-worn clothes is showing an ornate bowl to a woman dressed in slightly richer clothes than most of the townspeople.

[Nobleman] Ah, Duncan, I see you have finally returned to our little town. What treasures have you brought for me today?

At that the old man looks up at the Nobleman, and sets down the bowl, smiling widely.

[Old Duncan] Mlord! I knew I would see you this day. I have something very special Im sure you would like to have in your collection.

Old Duncan turns around, moving a couple of crates aside, then reaching into one. He brings out something long and heavy wrapped in a cloth, and turns back toward the Nobleman.

[Old Duncan] I brought this all the way from the Southern Shore. Word is it comes from a far away land and its old enough to have seen its share of battles.

Old Duncan sets the package down carefully on the counter before him, then gingerly pulls back each side of the cloth. This reveals an unpolished sword, fairly plain looking.

[Old Duncan] The merchant who sold it to me said its a very powerful sword, and warned me never to touch it  Ive handled it only with a cloth since the day I bought it. I havent even polished it, as you can see. Now, I know it looks plain, but something about it CALLED to me  it MUST be magic.

The nobleman leans over the sword to take a closer look. As he inspects the length of the sword slowly, he is smiling.

[Nobleman] Magic, indeed. That is one thing my collection lacks, a magic sword. I must have it.

The Nobleman reaches into his jacket and brings out a pouch of coins.

[Nobleman] Now, how much did you say it was?

[Old Duncan] Well, Mlord, I paid a hefty sum for the sword, and brought it all the way from the Southern Shore especially for you 

[Nobleman] (impatiently) How much?

The Nobleman empties the entire pouch on the counter, about 50 coins, without hesitation. He picks up the sword, still wrapped in its cloth, and turns away from Old Duncan.

[Old Duncan] Remember Mlord, you must not touch the sword 

Not acknowledging what Old Duncan has just said, the Nobleman grasps the sword hilt and holds the sword upright, as the cloth falls to the ground.

The Nobleman begins to swoon, and his eyelids close slowly. Suddenly his eyes snap open and the scene changes.

The Nobleman is still standing with the sword upright, but in a dark forest. The air is foggy, and the shapes of people are visible in the fog. One of the figures emerges from the fog, a goblin with yellowish, rough skin, long stringy hair, and tattered clothes. He gives a guttural growl and charges at the Nobleman.

The Nobleman swings his sword, slashing across the goblins chest, and the goblin falls to the ground. Another goblin charges similarly, and the Nobleman strikes him down as well, and then the same to a third goblin. Suddenly a fourth goblin comes at him from the right, knocking the Nobleman to the ground, and kicking the sword from his hands. The Noblemans eyes close slowly.

As his eyes open suddenly, he is lying again in the market, and all that is visible is Old Duncan standing above him and the sky bright behind. The Nobleman begins to sit up.

Suddenly he, and the audience, see the scene around him. Stalls are overturned, pottery and other wares lay broken and scattered on the cobblestone, and three townsfolk lie bleeding and still on the ground. Beyond, the other townsfolk stand, keeping their distance, looking shocked and horrified, some of the women weeping. A look of shocked, wide-eyed horror is on the Noblemans face.

The camera pans slowly away from the tableau.