Song of the Whipoorwill 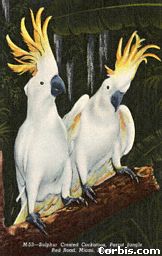 Sometimes I play a bird sounds tape for my albino budgie, Gwenivere, and my mother's yellow and white cockatiel, Amber. I worry, though, when the whippoorwill on the tape sings. It is a song that Aaron, Amber's mate, used to sing. He died a few years ago, of pneumonia we think, and he is buried in a cardboard box in our back yard.

At Christmas, we moved the birds upstairs so they would not be in the dining room during our family dinner. At times, we had Amber and Aaron in separate cages so they would stop mating and laying infertile eggs. As we took the cages upstairs one at a time, the birds called for each other until they were together again, a shrill, questioning song. I wonder sometimes whether birds understand the concept of death, and at what point they realize their friends are not coming back. After Aaron died, whenever Amber heard someone walking down the stairs, she would call for her mate. After a month, she stopped: she must have realized he was never coming back. Whenever she hears the song of the whippoorwill, I worry that she thinks it is Aaron returning, only to be disappointed that he does not.