In the Name of Survival 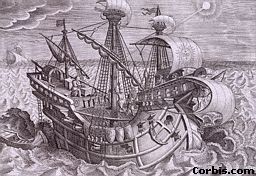 I looked North. The scenery consisted of an endless expanse of snow and ice. There were no trees, no buildings, just the unending whiteness. I stared ahead, eyes fixed, hypnotized by the eternal sameness of the landscape.

Someone coughed behind me, a hopeless, sickly cough. I turned, the spell broken, and looked upon my companions. There were three other survivors besides me. They all had ashen faces, and their skin hung loosely on their skeletons. I knew I must look the same to them.

They huddled around the fire, which was fuelled by pieces of The Haven. Behind my companions was the black ship, half sunken into the ice-strewn waters. We had been making good time on our voyage until suddenly one night we had hit the ice. It had ripped a large gap in the hull of The Haven. We all scrambled off the ship and onto the ice, and then watched helplessly as the ship sunk slowly into the water, until it was about half submerged. Once the ship appeared to have stopped sinking, a few of the crew members were sent to get our remaining supplies. All of them made it back, except one who had slipped and fallen into the freezing water, and had never surfaced.

We set up camp on the ice, using all the blankets that could be found to try to stay warm. We used pieces of the ship to build the fires. Five crewmen had died within the first twenty- four hours from the extreme cold. They had been the lowest- ranking crew members, and had therefore been allotted less blankets. Eventually, almost all of the crew had died, from exposure or from starvation. We piled the bodies of the dead crewmen beside the ship, where they lay stiff and frozen.

Now I looked near by my feet, where the body of one of the crewmen lay. He had been one of the natives we brought with us, and that is why he was chosen from among the dead. After all, it would not be a sin to eat one of the heathens, so our logic went.

I turned the knife around in my hand. My companions looked at me, silent, each knowing that this was wrong, whether the man was a heathen or not. We had eaten all of the supplies, we had eaten the Captain's dog, and we had even eaten boiled leather clothing and candles. Whatever we could salvage from the ship which could possibly be consumed was gone. Now, we had gone four days without food. We knew there was no hope of rescue, and there would not be any settlements that far north. Our survival had come down to this one last, desperate choice. I had drawn the shortest straw, and so the task was mine to prepare our next meal.

I crouched over the body of the native man. I sunk my knife into his arm and cut out a rectangular chunk of flesh, and then three more. I set them in a cooking pot and placed it over the fire. We were all silent as we watched the meat brown. At last the meat was ready to be taken off the fire, and as I did so, my mouth watered instinctively. Finally, I could have the food that my body so hungered for. Real meat, succulent meat, fresh meat . . .

I reached into the pot and grabbed a piece of the meat, then brought it toward my mouth. With that meat, I could survive longer, maybe long enough to make it back to civilization. Survival - that is what I held in my hands. Then, just as I opened my mouth to take a bite, I saw the native's face out of the corner of my eye. I dropped the meat onto the snow.

"No," I said, my voice sounding weak and hoarse. I backed away from the fire, from my companions who were now staring at me, and from the corpse. I turned, running along the snow-covered ice. I had to get away from that horror. I could not eat the flesh of another human being, I could not - survival or no, I just could not.

I imagined that the spirit of the native man chased me, and so I ran faster, desperate to get away from the evil. I ran farther into the frozen hell.

I climbed a hill of snow, the last of my strength almost gone, but I was still trying to escape the experience. I reached the top of the hill, then tumbled down, losing consciousness somewhere along the way.

Some native hunters found me and took care of me. They found my companions, too, still seated with the uneaten flesh in their hands, staring into the fire.

It is strange that there were others so far North. There we were, exploring unknown regions, and the natives had been travelling there all along. All our suffering was for nothing. Some of us had gone on the expedition for glory, to be able to brag that we had gone farther North than anyone else. Some of us had gone just to know that we had been the first to that empty land. Many of us, myself included, had gone for the money. It was hard for the captain to find people who were willing to go to the Arctic. Therefore, all of us were promised to be paid a large sum. Now, it seems such a silly reason for me to have gone on that voyage. If I had all the money in the world right now, I would trade it to have refused to go on the voyage. All that horror we endured up there served no purpose at all.

I wish I had perished up there in that frozen hell. Even in my own room with a blazing fireplace, the memories of that day still chill me to the bone.