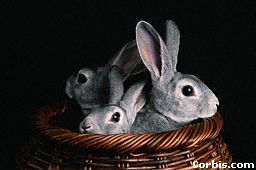 Outside, it was a warm, sunny, spring day. Flowers bloomed and new leaves grew on the trees. Birds flew through the sky, singing. They were happy to be free. Inside the Happy Hamster Pet Store, though, things were different.

Pippin the parakeet shook his feathers. "It's hot in here," he complained for the tenth time that day, "I wish I had a bird bath so I could get cooled down."

"I wish Mr. Wilson had a fan in here," spoke up Trixie hamster as she groomed her brownish-grey fur, "but he wouldn't want to spend his money on one."

Easter, a black and white tabby kitten, looked up from her cage. "This is called the Happy Hamster Pet Store, but you don't seem very happy to me."

"Well, what do you expect?" asked Trixie. "Mr. Wilson is never nice to us. He is grumpy all the time and yells at us. He never gives us any vegetables or treats, only cheap seeds and things. He never turns the heat up high enough in the winter, and he never makes it cool enough in the summer. He is downright mean to us!"

"Yeah," said Pippin, "he never lets me out to fly. I'm stuck inside this little cage all day."

"Someone's coming!" Polly, a red and blue parrot, called from the front of the store. "Look happy, and they might take us home."

The animals looked out of their cages as the bell on the door went ding. "It's Sunny!" Polly called as a nine-year-old girl came into the store. She had long, blonde hair and blue eyes. She wore blue jeans and a white T-shirt, and had a knapsack on her back.

"Hello, Sunny!" all the animals called.

"Hello, everyone!" the girl said. "How are you today?"

"You poor things," said Sunny. "If I had enough money, I would buy you all and take you home. I have a garden in my yard where I grow vegetables and sunflowers. I would feed you yummy foods all the time, and I would always be nice."

"I wish I lived with you, Sunny," Trixie stated. All the other animals agreed.

"I'm saving my allowance, and someday I will have enough to buy you all," Sunny said. Suddenly, the door to the back room flew open. A tall, heavy, forty-year-old man came out. It was Mr. Wilson.

"Why are you here again?" he asked Sunny in a mean voice. "I thought I told you not to be hanging around here all the time. Either buy something or leave."

"The animals are no business of yours. Now get out of here before I send Spike after you." A pitbull dog came into the room and growled at Sunny.

"Bye, everyone!" she called to the animals as she ran to the door. "I'll buy you all some day!" She went out the door before Spike could come after her.

Mr. Wilson walked to the door and locked it. He put the closed sign in the window, and walked back to where the animals were.

"Stupid animals," he muttered. "I thought I would get lots of money owning a pet store, but all I do is lose money. And I am sick of putting up with all of you. I should sell this place. Then, I would never have to take care of another animal again, except Spike, my trusty guard dog." Spike growled. Mr. Wilson turned off the lights in the store and walked to the back door.

"Wait, Mr. Wilson," Easter called, "aren't you going to feed us before you leave?"

"I'm not wasting any more food on you," he stated. He went outside and closed the door.

"I have an idea," Trixie said, her whiskers twitching. "Why don't we get out of here? Then Mr. Wilson can't be mean to us anymore."

"Where would we go?" Easter asked.

"We could go to Sunny's house," Trixie said. "She would be nice to us, and we would have fresh vegetables to eat every day." The animals all agreed that they would like to go there.

"But how can we get out of here?" Easter asked. "We're all locked in our cages."

"Polly isn't," Pippin said, "she gets to fly free around the pet store."

Polly flew to the back of the pet store and landed on Pippin's cage. "What?"

The animals told Polly their plan. "We need you to let us out of our cages."

Polly thought for a minute. "I don't know. What if Mr. Wilson catches us. What will he do?"

"Let's get out of here!" Trixie said as she ran towards the back door. The others followed. Suddenly, they heard a growling sound. The animals stopped running.

"Oh, no, it's Spike," Easter said. "What will we do?" Spike stood between the animals and the door.

"Attack!" Polly cried suddenly, and she flew at Spike. Spike chased Polly, trying to catch her, but she stayed just out of reach.

"Run!" Trixie cried. All the animals ran towards the door. They went out through Spike's doggie door. Polly followed. Spike ran through the door, barking, but the animals were ahead of him. The flying animals flew over the fence and the others squeezed through a hole in the boards. Spike was left on the other side since he was too big.

"Victory!" Trixie cried as she ran. "Now we go to Sunny's house!"

Sunny's house was three blocks away. She had told the animals where it was many times. The animals ran or flew there, excited that they were finally going to a better home.

When they arrived at Sunny's house, Polly flew up and rang the doorbell. They waited a moment and then Sunny opened the door.

"Trixie! Polly! Pippin! Easter! What are you doing here?" she asked.

"We escaped," Trixie told her, "and we are coming to live with you."

"Wow, this is great!" Sunny said. She looked at the crowd of animals on her front porch. Other than Trixie, Polly, Pippin, and Easter, there were three hamsters, a budgie, a pair of love birds, two gerbils, and four turtles. "Come in, everyone!"

The animals came inside and sat in Sunny's living room. Just then, her father came into the room. "What is all this, Sunny? Where did all these animals come from?"

"They escaped from the pet store," she said. "Mr. Wilson was mean to them. Can I keep them, daddy?"

"I don't know, Sunny. Mr. Wilson owns these animals and he probably wants them back. We can't keep them if they don't belong to us."

"But he's mean to them," she pleaded.

"We still can't keep them. We can report Mr. Wilson to the police, though. It is against the law to be mean to animals."

"Yes, do it, Daddy. Then can we keep them?" Just then, the doorbell rang. There was also a familiar barking noise.

Sunny peeked out the window. "It's Mr. Wilson!"

"Those are my animals! You stole them from me. I want them back." He walked over and grabbed Trixie. She bit his hand and he dropped her. "Why, you stupid-"

"Mr. Wilson," Sunny's father said, "Sunny tells me that you mistreat the animals in your store. Is this true?"

"What business is it of yours?" Mr. Wilson snapped.

"I'm going to call the police, Mr. Wilson. I love animals, and I don't like to see them treated unkindly. Please leave."

Sunny smiled. "Yes, Daddy, why don't you buy the store? You wanted your own store. I could even work there after school and on Saturdays. Please, Daddy?"

"Hmm, that is a good idea. I could finally own my own store. But what would you do, Mr. Wilson?"

"I'd take Spike and the money and move to the city. I heard you could make a lot of money there selling greeting cards. I would leave you and these animals alone, if you would just not call the police."

Sunny's father bought the pet store. Sunny helped on weekends and after school, just as she had promised. She also brought the animals fresh vegetables from her garden every day.

Sunny's father made a lot of money with the pet store. Everyone came there because the animals were all healthy and happy. Even though Sunny was sad whenever any of the pets were sold, she knew that they were going to a good home. Sunny and her father never saw Mr. Wilson or Spike again.