Desdemona as a Tragic Heroine 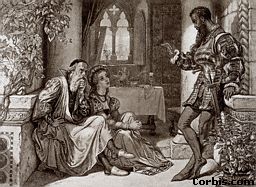 When one considers the play Othello, Othello stands out as the tragic hero. He is not, however, the only one. To be a tragic hero, a character has to be suffering worse than he deserves, isolated from society, defeated at the end of the story, sacrificed for a cause, or have a tragic flaw. Desdemona is one character in Othello with some of these characteristics. Desdemona is a tragic heroine because her suffering is not proportional to her mistakes, she is overcome by forces she cannot control, and she is sacrificed for the benefit of others.

Desdemona, like most tragic heroes, endures suffering that is greatly out of proportion to her mistakes. Desdemona is a kind and friendly individual. Her problem is that she is too kind. She also lacks the wisdom to see what grave danger she is in. Desdemona wants Cassio and Othello to be friends again. She starts spending more time with Cassio, unaware that Othello will become jealous. She does not realize that Othello suspects she is cheating on him. If she knew soon enough that Othello thought she was cheating on him, she could have explained to him what the situation was. Othello might have believed the truth while he was not yet blinded by jealousy and hate. Later on, when Desdemona wakes up to find Othello by her bed, he practically tells her that he plans to kill her. She could have escaped Othello if she was smart enough to figure out she was going to die and leave when she could. Even though Desdemona is naive, she does not deserve the suffering she experiences. She is abused verbally and physically by Othello and then finally smothered to death. Just because someone is naive and lacks the wisdom to prevent her downfall, she does not deserve to die. Since Desdemona's suffering is greatly out of proportion to her mistakes, she has this characteristic of a tragic heroine.

Desdemona is overcome by forces of a world she cannot control. She tries to control her husband by making him be friends with Cassio again. She arranges meetings between them and always says good things about Cassio. She never does get Cassio and Othello to be friends again. Instead, her actions cause Othello to believe that she is cheating on him. This puts him in a jealous rage, in which he smothers her to death. Because Desdemona is overcome by the force she is trying to control, which is Othello, she has this characteristic of a tragic heroine.

In this play, Desdemona can be considered to be a sacrificial heroine. Although she does not sacrifice herself, she is sacrificed by some force like fate. This is done to expose Iago and reveal the truth. When Desdemona is alive, Othello will not believe that she is not cheating on him. Just before her death, when Desdemona says she does not love Cassio, Othello still does not believe her. It is only when she dies that everyone comes forward with the truth. All the characters then know what a liar Iago is, and what all the cruel things he did were. Now that the truth is revealed, Iago will not be able to have anyone else believe his lies. This may have saved many lives from being ruined. Because Desdemona is sacrificed so that the truth can be known, she is a sacrificial heroine, and therefore has that characteristic of a tragic heroine.