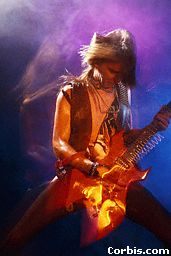 Thank you! [go off "stage" and into "dressing room"] [sigh] Another day, another dollar. [go get beer off of table] I just love the song "Poison." Alice Cooper sang it originally. He's great! My favorite band is Def Leppard, though. Steve Clark is my hero - or WAS my hero. He died a couple years ago. I wanted to meet him some day. I guess now I can't. [take drink] As a kid I dreamed of being just like him, to be in a band, play the guitar. They say it was drugs that killed him. That won't happen to me, though. I've got everything under control. ["smoke" cigarette] I only drink and do drugs because of all the pressure of being on the road. All the famous bands do it too. Def Leppard, Alice Cooper, G and R, everyone. And they're still around, right? I don't think it's the drugs that kill you anyways, it's the stress from everyone nagging at you, telling you NOT to do drugs. [laugh] [sigh] Ya know, it's the fans I love. They love your music, they worship you, and they want to be just like you. [go to take drink and then frown] They want to be just like you. [lower beer can] If you take drugs, they will too. I'm ruining my fans' lives! [hang head] That's it. [lights get gradually brighter] No more booze, no more drugs. I quit! [stand up] Hey, I know. I'll become an anti-drug activist. I'll sing about how drugs ruin your life and all your friends' and relatives' lives. [look to stage right] Five minutes? O.k. [throw beer can] Good-bye to the old Steve Cooper and good riddance! [look up while walking to stage right] Hey world! Get high on life! Hugs not drugs! And, don't be stoopid! [said while pointing at audience] [go "on stage"] [lights really bright by now]